Why You Shouldn't be a Centrist 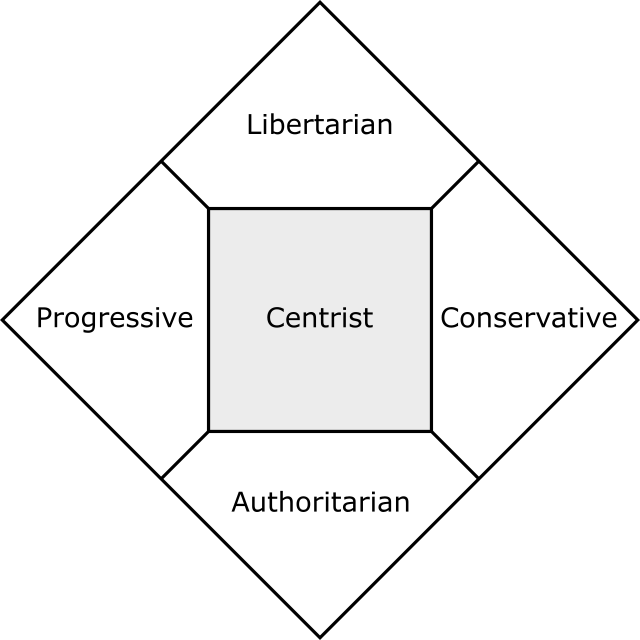 “Conservatives are dumb, liberals are dumb, everyone is dumb except me”. Chances are, you’ve probably thought this to yourself at one point in your life. And I’ll admit, I actually believe both liberals and conservatives are wrong, but my critiques come from a leftist perspective, which I won’t elaborate on in this article. When people see both sides of the political spectrum doing crazy things; like conservatives trying to ban WAP or liberals trying to cancel Addison Rae for introducing herself to the former president, it’s easy to dismiss partisan politics as a whole, but I want to caution against such practices.

Before I go further, let’s define what exactly I mean by “centrist”. A centrist isn’t someone who doesn’t follow politics, those people are apolitical, meaning they abstain from politics. A centrist can be defined in two ways: someone who agrees with both parties on different issues, or someone who wants to take a neutral position on every issue. Now there’s nothing wrong with agreeing with an opposing political party once in a while, you shouldn’t agree with one political party or ideology wholeheartedly, or you may not be thinking critically. The big misconception here is that agreeing with both parties on different issues doesn’t make you a centrist, it just means you have a nuanced perspective but you lean one way or the other. If you still feel like you don’t lean one way or the other, that’s okay! It probably just means you haven’t done a lot of research and you would more closely identify with being apolitical.

The main type of person I’m going to be discussing is the latter, someone who takes a neutral position on every issue. We all know this person, and you might even be one of them. These are the people who play devil’s advocate for fun, or seek compromise in every situation. The problem is, many people conflate taking the centrist position with having an intellectually superior take. Many centrists hold the subconscious belief that they’re more intelligent or can see things more clearly because they don’t buy into partisan politics.

Centrists usually support ideals such as “bipartisanship” and “compromise”, just for the sake of doing it. For example, most centrist democrats don’t believe that compromising on their priorities is a good thing for the wellbeing of the country, but they insist on doing it because they believe a compromise will always produce good results, even when this may be untrue. This notion is absolutely preposterous, as there have been countless times in history when compromises have yielded bad results, (i.e. the ⅗’s compromise). Imagine if the founding fathers had compromised and let half of the colonies exist under British rule, or if Abraham Lincoln compromised and only emancipated half of all slaves. Despite all of this, centrists view taking the middle ground as the intellectually superior position in all situations.

It also disregards the fact that centrists have almost always been wrong historically. Let’s use the Civil Rights Movement as an example. Conservatives wanted to uphold racial segregation laws because they believed in “racial purity”. Leftists and other left-wingers wanted to end racial segregation laws because they were discriminatory against African Americans. Today, I think we can all agree that left-wingers were correct. But neither of these perspectives was the most popular position held by the public. The most popular belief was the centrist position, which asserted that “while I disagree with segregation, I think private businesses should have the right to deny African Americans employment due to their race because business owners should be able to hire or fire whomever they want for any reason”. Most Americans bought into this kind of thinking, believing that they had an intellectually superior take and could see the faults in “both sides,” a position we still see taken by centrists today.

This obsession with making “both sides” of every issue moral equivalents is foolish. In the case of the Civil Rights Movement, we see in hindsight that one side was clearly wrong and one side was clearly right. But at the time, most Americans saw radicals on both sides of the issue as moral equivalents. The common consensus was that groups like the Black Panther Party were just as bad as the Ku Klux Klan. Activists like MLK and Malcolm X were some of the most hated people in America, and even Jackie Kennedy disavowed them.

Today, we see a similar situation occurring. The mainstream media will often try to make moral equivalents between the “radical” factions of the Democratic and Republican parties. The “radical” faction of the Democratic Party believes in universal healthcare, free college, and the complete elimination of fossil fuels. While the radical faction of the Republican Party tried to violently overthrow the government and supports conspiracy theories, as seen with QAnon, which alleges that popular celebrities and high-ranking Democratic politicians engage in human trafficking and harvest blood from babies. Just a couple of weeks ago, President Joe Biden tried to make a moral equivalent between Democrats wanting to reallocate funds from police departments to social services and QAnon supporting Republicans. The fact is there is no “both sides'' argument to be made, one side of the aisle is clearly fascist and the other side is arguably not as radical.

If you paid attention in your U.S. history class, you probably know that the popular centrist position in regards to slavery was to allow it to continue where it already exists, but stop it from expanding to new states. People like William-Lloyd-Garrison were arrested and publicly labeled as radicals since they called for the immediate abolition of slavery. This is because anything that disrupted the status quo scared people, no matter how necessary it was. Martin Luther King famously wrote the following in his letter from Birmingham Jail “I have almost reached the regrettable conclusion that the black american’s great stumbling block in the stride towards freedom is not the...Ku Klux Klanner, but the white moderate who is more devoted to order than to justice”. It’s the last statement that rings the most true in my mind, “more devoted to order than to justice”. This is the position that centrists have maintained throughout history, they would rather protect the status quo no matter its shortcomings rather than support any kind of movement that would radically change their life, even in a positive way.

This way of thinking comes from a reactionary standpoint, where any kind of significant change is viewed as bad. Although radical change can be scary, it’s important to realize that true change cannot occur without a significant restructuring of society. If you were a centrist in the mid-1800s, you would probably hold on to naive ideas, such as thinking you can compromise with slave owners and kindly ask them to give up their slaves. However, this kind of thinking was foolish then and it’s foolish today. Centrists will usually say things like “why can’t they protest peacefully?” or “I agree with their goal, but not their methods”. The truth is that activist groups have tried to protest peacefully for years, but their cries weren’t seriously acknowledged until they resorted to looting and rioting.

As seen throughout this text, if you look at almost any movement throughout history, those dubbed as “radicals” usually end up being right in hindsight. You probably think “okay, centrists might have been wrong in the past but surely we know better now, right?” I hate to break it to you but chances are if you have a centrist take it’ll most likely be considered evil at worst and laughable at best when it’s examined in hindsight 50 years from now. The same people going on television complaining about looting and rioting when it comes to BLM wouldn’t be fighting alongside Martin Luther King, no matter how much they think they would. The next time you’re introduced to a political issue, don’t take the easy way out and propose a compromise for the sake of compromise. Look at both sides critically, do your research, and form your own conclusion. The bottom line is this: taking a centrist position does not make you intellectually superior. In fact, it’s one of the most intellectually lazy things you can do as centrists have been historically wrong.