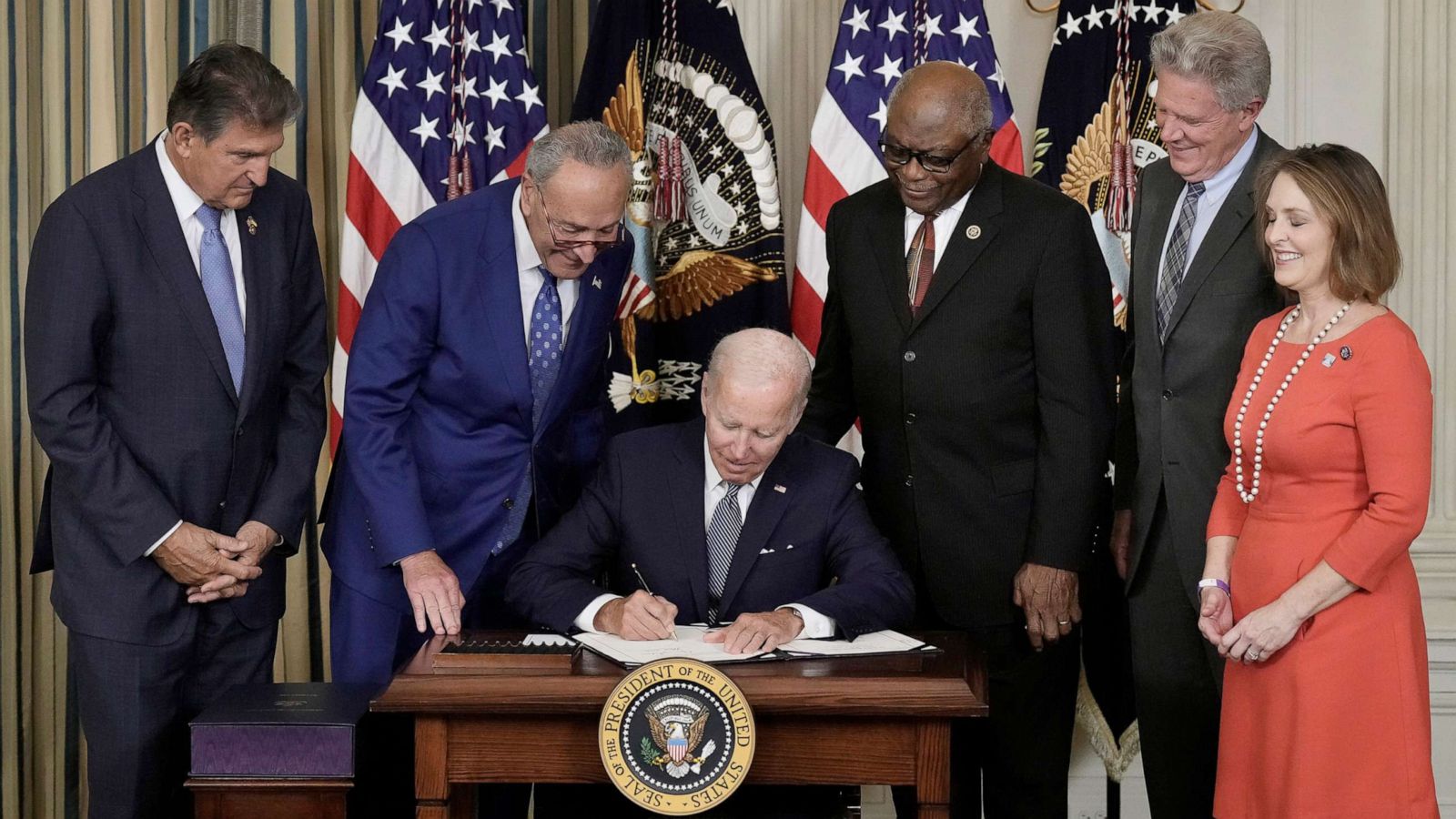 This brief is focused on the recently passed Inflation Reduction Act, as in its elements and the various effects they may have on the economy. The relevance, history, and policy options regarding this act will be explored.

The Inflation Reduction Act is one of the single largest pieces of economic legislation that has been passed in the last several decades. Some key elements  include changes to the Affordable Care Act, money towards fighting climate change, and corporate tax hikes. Because the act is so multifaceted in nature, it is questioned as to how the economy will be impacted.

As noted previously, this act has multiple aspects that imposes various legislation depending on the industry. For example, money is being spent for clean energy subsidies but is being collected from the new corporate tax minimum. This raised a question as to whether this act as a whole will result in an increase or decrease in the federal deficit.

‍The promoters of the act hold that it will decrease the deficit by around $300 billion over the next decade, while some disagree or at the least believe it will have very minimal impact. This is of particular importance because the federal deficit is a large factor of inflation, and a major goal of the bill is to eventually reduce inflation.

The bill will certainly be spending a large amount of money for healthcare and climate change related issues, but the question is whether the new streams of revenue will make up for it. The corporate tax minimum will certainly drive up revenue, but the “how much” can’t necessarily be said as companies are known to find loopholes around new tax legislation.

The larger question mark exists around the IRS budget increase. $80 billion was dedicated toward expanding the IRS which they predict will increase revenue. The issue is that it cannot be guaranteed that the IRS, even with more resources, will be capable of preventing people from not paying as much as they should be, at least on such a large scale.

This question is key to why this act matters, as whether it will accomplish its goal won’t be determined until years in the future.

The mere size of this act, despite being a small part of the initial proposal, is worth noting as well. This bill may be a new direction the government is heading in, in which they take a stronger stance on spending money toward the issues they believe to be of vast importance and making rich corporations pay the price. President Joe Biden stated this is “one of the most significant laws in our history.”

The government has almost always spent large amounts of money in a deficit, dating mostly back to FDR during the Great Depression. However, this act illustrates a new time of large government spending that is accompanied by even larger taxes, to not only make up for the spending, but to surpass it.

This is especially a change from the last decade where the agencies like the IRS only have spent a little over $10 billion a year. This new precedent can mean a future of legislation that continues along this path in which the consequences are relatively unknown.

In 2020, Biden campaigned on finally addressing the climate crisis, pledging to cut U.S. emissions by at least 50% below 2005 levels by 2030. The country serves as a lead producer of greenhouse gas (GHG) emissions as the climate crisis has progressed. Up until now, Biden’s administration was not on track to achieve their emission reduction goal. However, the Inflation Reduction Act is poised to reduce GHG emissions by a third against 2005 levels.

At the same time, this law will address the United States’ energy independence with a slow but steady transition to renewable energy. An issue brought to light in the aftermath of the worldwide fuel shortage from the war in Ukraine, the Inflation Reduction Act’s subsequent energy independence will expand subsidies for consumers and companies.

The Inflation Reduction Act also promises to lower the cost of living for Americans. The act expands Medicare’s ability to negotiate the prices of prescription drugs. Under this legislation, pharmaceutical companies cannot raise their prices at a rate greater than inflation without issuing a rebate.

In regard to actually lowering inflation, however, the Penn Wharton Budget Model outlines that “the impact on inflation is statistically indistinguishable from zero.” In July 2022, inflation eased slightly from 9.2% to 8.5% while staying considerably above the Federal Reserve’s target rate of 2%.

While prior all-encompassing climate legislation has been attempted, the Inflation Reduction Act is the first of its kind. When the Biden agenda appeared to have stalled, President Biden contemplated declaring a climate emergency to expand the Executive Branch’s authority. But any executive orders he would have issued or may issue in the future have the potential to be reversible.

For example, former President Trump reversed hundreds of President Obama’s climate-related actions. The same does not hold true for this legislation. And even if Republicans sweep the House and Senate in this November’s midterms, the Progressive Policy Institute believes that the popularity of the tax credits will make it  “very unlikely” that they would be repealed.

Funding the Internal Revenue Service has been a priority for Biden as a means of funding his ambitions on education, childcare, climate, and more, but such broad funding has never been attempted similarly. The IRS has been underfunded for years. The $80 billion devoted toward its funding should go toward cracking down on wealthy tax evaders and modernizing technology.

Along with Joe Manchin and his constituents having enormous sway over the outcome of the bill, Democrats on the progressive side of the party also have a great deal of influence over the bill’s structure. For example, increasing corporate tax rates, as the bill promises to increase to a minimum of 15%, have been a progressive policy point for nearly a decade. Progressives in the senate such as Bernie Sanders and Alex Padilla have an enormous incentive to keep the bill’s progressive clauses in place.

With the midterms right around the corner, the Democratic Party is in dire need of results to show the American people. So far, they have regained momentum due to gas prices slightly falling, with Mitch McConnell admitting that his party might face defeat in the upcoming Congressional elections. However, this won’t be enough to fight against Biden’s disapproval rating, which is higher than that of Donald Trump at the same point in his presidency.

As the bill calls for prescription drug pricing reform, something very popular among the Democratic voter base, the passage of the Manchin-Schumer Bill could energize the Democratic base enough to turn out in election-winning numbers on voting day.

The 1% excise tax on stock buybacks by corporations will most likely not have that great of an impact on corporate profits. However, it will undoubtedly allow the federal government to intake more revenue. According to Reuters, the stock buyback clause will bring in an estimated $74 billion in income.

While the 1% clause of the bill will most likely not cause shifts in the American economy, the same can not be said for the 15% minimum corporate tax rate. The new 15% minimum tax rate would apply to corporations that report an annual income of more than $1 billion to shareholders on their financial statements but use deductions, credits, and other preferential tax treatments to reduce their effective tax rates well below the statutory 21 percent.

By lowering corporate tax rates by 6%, companies will be able to hire more people and pay their existing employees more money due to not having such a significant tax burden. This would undoubtedly help in creating an offset to the high gas prices currently plaguing the Biden Administration, as the average American would have more spending money due to higher salaries and more jobs.

The Inflation Reduction Act is one of the largest pieces of legislation passed by Biden’s administration.

It involves allocating spending toward fighting climate change, planned reduction of the economic deficit, drug pricing reform, and a new corporate tax minimum. As the bill attempts to tackle several issues at once, it is difficult to predict when we will see the results of this bill or if the bill will be successful at all.

Whilst the bill has increased Biden’s approval rating since the beginning of the year, his disapproval rating remains high, and Biden’s future legislative changes will prove to be crucial in determining the results of future elections to come.

The Institute for Youth in Policy wishes to acknowledge Lucas Yang, Elizabeth Miller, Nolan Ezzet, Marielle DeVos, Luke Drago, and other contributors for developing and maintaining the Policy Department within the Institute.