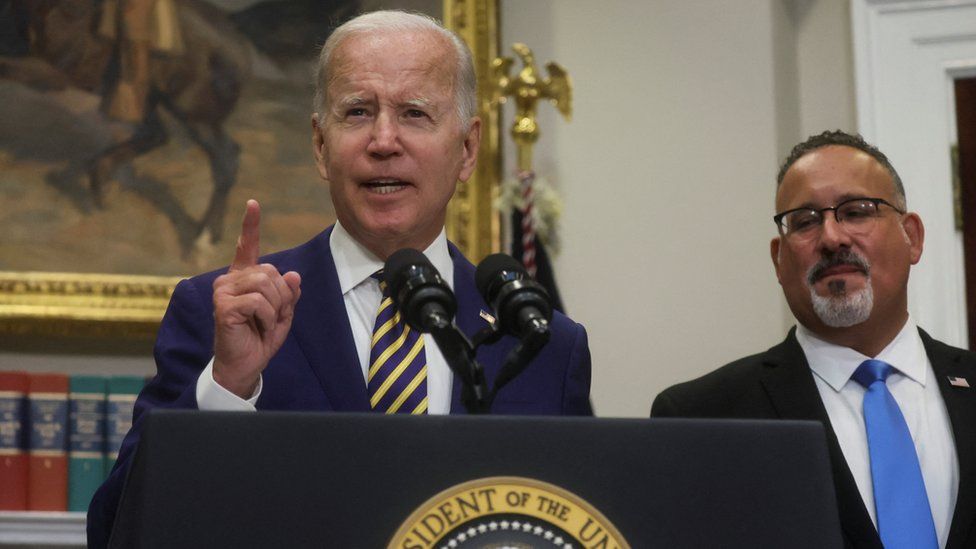 This brief will cover Biden’s new student loan forgiveness proposal in relation to its economic implications. The relevance, history, related policy options, and a conclusion about said policy options will be demonstrated.

President Joe Biden alongside the Department of Education proposed that eligible individuals have up to $20,000 of their student loan debt canceled. In the plan, there are also other features such as forgiving loan balances under $12,000 after 10 years and requiring borrowers to pay no more than 5% of their monthly income. These are just some aspects of the proposal; but altogether, there are potentially vast economic impacts. Since then, President Biden has taken executive action to accomplish these goals due to low political capital and little bipartisan support. Since then, the plan has undergone immense challenges with its legality and method of passage having been placed under scrutiny, stalling progress & delaying results nationwide. Thus, it’s crucial that the merits of the plan are examined.‍

The student loan crisis is centered around the large financial burden that loans place on each borrower. A person in debt is less able to live their life how they choose because they have to set aside a large portion of their income to ensure they pay off their debt. They may hesitate to purchase a home, to start a family, or to make any significant financial decision until their debt is gone. As stated by Kevin Miller, the BPC associate director of higher education, “The student loan system is saddling millions of students and families with debt that harms their long-term financial security and well-being.” Altogether, the financial impact of student loans have made this issue of utmost importance, especially considering that “the federal student debt portfolio of $642 billion in 2007 skyrocketed 144% to $1.56 trillion by 2020.”

One component that needs to be looked at when examining student loan forgiveness is the fact that these people will now have more money to spend than they did previously. Loan forgiveness is almost like a minor lottery for millions of people. This has the potential for several effects. From one point of view, it could stimulate the economy by allowing for more money to be circulated between businesses and consumers. But there could also be an issue of supply shortages and thus inflationary results. So the plan could have positive or negative implications economically, or a mix of both. This illustrates a need to examine this policy further to determine what is most likely to occur in case it were to be implemented.

September 2011’s “Occupy Wall Street” movement was one of the first to protest the flaws of the modern college education system, ranging from ballooning costs, accumulating debt, and discriminatory impacts. The Occupy Student Debt Campaign was founded in direct response to this student loan crisis. Student debt hit $1 trillion in 2012, prompting the newly-formed Debt Collective to call for the abolition of all student debt and establishment of free college. These coalitions drew national attention in the 2016 election cycle as student loan debt continued to grow.

In 2020, Democratic candidates began proposing the broad abolition of student debt for the first time. Compared to presidential candidates Elizabeth Warren and Bernie Sanders, eventual primary and general election winner President Joe Biden’s plan to address student debt operates on a much smaller scale. Uncertainty about whether or not student debt forgiveness was a legal executive action put a pause on the president’s plan. Up until August’s student loan debt relief plan, it seemed as if the buck had been passed to Congress for unlikely steps moving forward.

Between 2004 and 2022, nominal total student loan debt in the United States increased from $0.26 trillion to $1.59 trillion, or 511%. During that timeframe, this debt as a percentage of nominal total household debt grew from 3% to 10%. While the average individual student loan debt level from 2004 to 2022 increased by 140%, the average annual cost of tuition and fees at public and private four-year universities hit 86% and 76% respectively — a significant disproportion. In 2022, federal student loans reached $1.5 trillion.

President Biden’s plan will provide up to $20,000 in debt cancellation to Pell Grant recipients and up to $10,000 in debt cancellation to non-Pell Grant recipients. Borrowers are eligible if their individual income is no more than $125,000 or if their household income does not exceed $250,000. This forgiveness plan further modifies income-based repayment plans, doing the following: a) requiring borrowers to pay no more than 5% of their discretionary income on undergraduate loans, down from 10%, b) raising the amount of income considered non-discretionary and thus protected from repayment, c) forgiving balances of $12,000 or less after 10 years of payments, down from 20 years, and d) covering unpaid monthly interest so that no borrower’s balance will grow as long as they make their monthly payments. Finally, the plan extended forbearance through December 31, 2022.

According to the White House, this plan will “provide relief to up to 43 million borrowers, including canceling the full remaining balance for roughly 20 million borrowers.” The University of Pennsylvania’s Wharton Budget Model confirms this, adding that 75% of the benefits will fall to those making under $88,000 annually.

Progressives championed this move as an opportunity for equity. Rising tuition prices coupled with stagnant household wages have created an inequitable gap as more families have had to borrow to attend college — which has become almost necessary to reach the middle class.

Critics argue it will further add to inflation with exorbitant spending. The Wharton Budget Model analysis predicts that President Biden’s plan could cost upwards of $1 trillion, with a guaranteed price tag of at least $605 billion.

Further suits are expected, more specifically targeting the benefits this provides staff in the Biden administration itself. Critics also point to this as an economic handout in an attempt to buy votes in advance of November’s midterms. Concerns abound whether future administrations will be expected to bail out more student debt in the future.

This issue is ongoing. Within five years, the amount of debt will have returned. According to the White House, the plan will “provide relief to up to 43 million borrowers, including canceling the full remaining balance for roughly 20 million borrowers.” But it does not go far enough in addressing the root of the problem: a postsecondary education system that has seen tuition rise three-fold in the last 30 years. That same system will put future borrowers in peril.

Within five years, the Committee for a Responsible Federal Budget estimates that the overall student debt portfolio will return to its current level of $1.6 trillion in 2028. In inflation-adjusted dollars, it would occur in 2031. However, this assumes no change in borrowing behavior. In reality, the Biden administration’s changes to income-driven repayment could lead to increased borrowing, slower repayment, and larger tuition increases. These behavioral changes mean student debt may return to its current size even faster.

As a result of the COVID-19 pandemic, former President Donald Trump put a pause on student loan payments that President Joe Biden extended multiple times. Since President Biden took office, no one with a federally-held loan has had to pay a single dollar in loan payments. The forbearance clause in President Biden’s plan will resume payments starting January 2023.

Just like with most other federal programs, the main stakeholder is the American taxpayer. As of September 18, 2022, close to 8 million people are automatically set to receive some amount of debt relief, with 35 million additional people expected to receive some relief or have their debt wiped out completely. However, the debt will not just disappear but would instead be spread out among the taxpaying population.

While it is hard to determine to what exact extent taxes will increase, we can make an educated guess by taking the total amount of student loan debt and dividing it by the number of taxpaying adults in the U.S. As of September 2022, there is a total of $1.75 trillion worth of student loan debt in the United States. Spread out among 148.3 million taxpaying adults, the average taxpayer would be responsible for close to $11.8 thousand worth of student debt.

As of September 2022, inflation has only been increasing, currently at a rate of 8.26%, the highest in 40 years. As a result of Biden’s student loan forgiveness plan, that rate would undoubtedly increase. As more people are paying more in taxes and more money is being spent by the government, the value of the United States dollar will only decrease, causing prices to increase further, continuing the cycle of inflation.

The student debt portfolio in America has now exceeded one trillion dollars in 2022. In comparison to proposals to completely eliminate student debt, Biden’s debt forgiveness plan is significantly smaller in scale, and it plans to assist an estimated 43 million Americans suffering from crippling student debts. However, potential side effects such as increased borrowing and larger tuition alongside severe backlash to whether Biden has the authority to administer debt relief are major blockers to not only lowering student debt, but maintaining this reduction. Finally, large government expenditures such as this one will almost certainly impede the progress the Federal Reserve has made in slowing down the economy, and inflation will continue to rise.