How The Overturn Of Roe v. Wade Will Turn The Red Wave Into A Red Splash 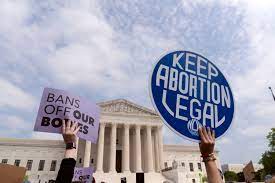 For the last few months, Republicans have expected to sweep Congress in November in a red wave that would flip control of the House and Senate. However, after the overturn of Roe v Wade, it looks as if there isn’t going to be a wave, but rather, a mediocre splash.

As seen by, Democrats are much more enthusiastic than Republicans about the concept of abortion. For example, 60% of Democrats say they are very concerned about abortion policy in the U.S. compared to 40% of Republicans, and about three-quarters of Democrats say that a candidate’s position on abortion is either the most important or a very important issue to their vote, versus 57% of Republicans. Along with that, the polls show that the party has a national edge on the abortion issue in the sense that a majority of the country identifies as pro-choice — including the majority of Independents as well as voters in the eight key swing states of Arizona, Florida, Georgia, Michigan, Nevada, North Carolina, Pennsylvania, and Wisconsin, all of which have an average pro-choice rate of 52%. To illustrate how impactful this is, if every pro-choice voter were to vote Democrat in these eight states alone, the Democrats would flip four U.S. Senate seats, making it almost impossible for the Republicans to take control of the Senate.

The decision to overturn Roe v Wade will galvanize the Democratic voter base, as Biden could turn the midterm elections into a referendum on Roe v Wade. However, this won’t necessarily create a blue wave. With the country facing an economic crisis, voters will take their wallets into account at the ballot booth. So, Republicans can still expect to gain from the midterms due to rising gas prices, inflation, and what seems to be an incoming food shortage.

Though the abortion situation unfolding before our eyes provides the Democrats with a way to rally their base and increase liberal turnout, it won’t be the seismic shift many expect. Instead, as mentioned before, economic situations will cause many people to vote Republican. This is reflected by the numbers, withshowing that 79% of voters view the economy as “very important” while only 52% view abortion as “very important.” Based on these percentages, it seems unlikely that abortion will eclipse the economy as the top issue in voters’ minds, as inflation and gas prices are not expected to stabilize until .

Finally, there’s the issue of whether voters will care about abortion come October or November. By overturning Roe v. Wade in June, five months before the midterm elections, the Supreme Court is allowing the voters to have time to forget about the issue of abortion. Along with that, there’s no telling if there will be an October Surprise this year, giving voters no reason to rethink how they cast their ballot a short time before they show up to the polls. Put another way, the voters may not care about abortion that much come election day due to unforeseen events. Plus, with Donald Trump moving back into the political scene, overturning Roe v. Wade could benefit Republicans in the midterms, as Trump could galvanize Republican voters under the pretense of making sure Roe v. Wade doesn’t return.

In the end, however, the ball is undoubtedly in the Democrats’ court. With tensions relating to abortion riding high, they can use it to their advantage for the upcoming midterm elections to counteract what seems to be an anti-Biden Republican wave by creating a pro-choice Democrat wave. While the chance of completely flipping midterm prospects is close to zero, it certainly lowers the likelihood that Republicans will sweep Congress.