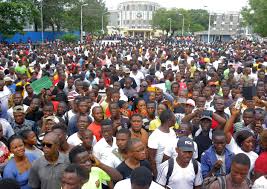 Liberia has long been plagued by conflict. Two civil wars (1989-1997 and 1999-2003 respectively) created a toxic environment, an environment that only leads to disaster and tragedy. During the wars, economic instability, a hardcore drug addiction (heroin, cocaine and methamphetamine) and war crimes were commonplace across the country. Child soldiers were used by both sides, and those children were the most active users of those drugs. The instability of Liberia largely arose beginning in the 1980's, with the election of Samuel K. Doe, who was the first native, African Born Liberian. His election was an indicator of the trouble that would be to come, as he was the first to be elected from the formerly enslaved native population. He was indicative of the social unrest the country was facing between the formerly enslaved and the ruling leaders.

His power would last 10 years, until it was challenged by Charles Taylor and Prince Johnson, who many argued was American backed. “The government and people of this country assure you that the armed forces will protect them, and the rebels will soon be eliminated.” These were the words spoken by Doe, and they were announced just a short time before the rebels had surrounded the executive mansion. Prince Johnson’s forces would overtake the mansion, and it was here that the future of Liberia would be cemented. In a scary foreshadowing of the upcoming second civil war, Prince Johnson tortured, interrogated and possibly cannibalized the former leader, all on live television. Charles Taylor would soon take control of the country- with the slogan “he killed my ma, he killed my pa, but I’ll still vote for him!” (Courtesy of Vice News). But not long after Taylor entered office, his corruption would lead to the second Liberian civil war. The first Liberian civil war was filled with significant tragedy- but the second one consisted of tactics and culture, the likes of which the world had ever seen. Cannibalism, hardcore drugs, and war crimes were a daily occurrence in the war, and to make the situation even worse, child soldiers were those partaking in the activities. Child soldiers were used by both sides, and many are still living today, struggling to survive through a war-torn country, with an obviously traumatic childhood.

After the civil war had ended, Charles Taylor was forced out of office, and was tried for war crimes in the U.K. Prince Johnson (the other rebel leader) exited the public eye. Violence stopped. Legitimate, Democratic elections were held. Despite the horrid past, the future looked somewhat bright.

But the country would continue to struggle. Since the end of the war, there has been a malaria pandemic, Ebola pandemic and of course, a COVID-19 pandemic. Ebola has been eradicated, but malaria has relentlessly attacked the citizens, the economy and the medical infrastructure.

Here, we will discuss the growing crisis in Liberia- one that includes two pandemics, political instability/political corruption and social unrest that if not solved, could be one of the most pressing international problems within the next 5 years.

To truly succeed, the country would need to separate itself from its past- which it has largely failed to do. Trials were held for the former warlords- warlords that killed thousands, committed hundreds of war crimes, warlords who had significant social influence. Instead of prosecuting them- most were pardoned, and, at best, were barred from serving in public office. In a 2012 documentary, Vice News found that these warlords, although not serving in public office, still maintained serious leadership positions. They serve as community leaders- leaders who largely kept a social order, leaders who helped maintain the infrastructure of their respective community, and leaders who, in extreme cases, ran the community economy.

That proves that former warlords, extremely violent military strategists, still have legitimate, widespread social influence. But a general is only as good as the soldiers that are fighting for them. But here is where the situation gets worse- almost all of the Liberian population were either soldiers (who would still have childhood trauma) or have been seriously impacted by the war. “It’s the fourth poorest country in the world. Fifty percent of the country is illiterate. Eighty percent is unemployed, and most of the population has eaten human flesh.” (Also, Courtesy of Vice News). With the impacts of the civil war not distanced from the current population, and warlords still having significant social power, the social unrest the country is facing could be on the verge of serious disaster.

Even worse, the original rebels that led the country into such a dark period of time, could still have power. Charles Taylor was convicted in 2012 for charges of murder and terror. What many hoped would mean the end of his political corruption in the country, many think still continues. In July of this year, the BBC reported that Agnes Reeves- Taylor, the ex-wife of Charles Taylor, had returned to Liberia- to a warm welcome. “The founding mother!” was cheered by the citizens of Liberia- despite her influence in the tragedy that the country had undergone. Even worse- she has had significant communication with Charles Taylor before leaving.

With Charles Taylor still wielding significant power through his former wife- attention then turns to the other rebel leader- Prince Johnson- the same criminal who tortured, interrogated and possibly ate the former President on live television. He is still occupying political power- he’s the Nimba County Senator (frontpageafricaonline). He hasn’t separated himself from the civil war, or the corruption that came from it. It was reported just a few weeks ago (August 7th, to be exact) that there was an audio of him that ties him to the death of three prominent Nimba County citizens. (Frontpageafricaonline).

To recap- the citizens of Liberia are either former soldiers- or citizens who were negatively impacted by the civil war. Their community leaders are former war criminals- many of which led the soldiers that are citizens today. The highest of leaders of the civil war- Charles Taylor and Prince Johnson still wield significant social influence. That demonstrates the social unrest the country is facing, and it also demonstrates the political corruption at the highest levels of government.

With former soldiers making up a significant amount of the population, and their former leaders still wielding social power, the question must be raised regarding the capacities of these leaders to initiate another civil war. In 2017, which is the most recent survey available, the gun ownership of citizens was 238,861 (gunpolicy.org). While that may sound like a positive, given that Liberia hosts a population of five million (worldmeters), there are a number of misleading details about that number. Compared to 2007, just a few years after the second civil war had ended, there were only about 51,000 guns owned by citizens- meaning in the 10-year period, private citizen gun ownership rose from 1.6% to 5.09%. While that may sound minimal, to best understand the capacity of what that level of gun ownership could do, it is important to know the capacities of the military. Compared to private gun ownership- that being 238,861 across 5 million citizens, the national army only has 2500 guns and law enforcement only has 5000 (gunpolicy). This is a shocking comparison- keeping in mind that those who have private guns are typically led by former warlords. The only thing that has maintained some sense of stability in Liberia was the United Nations- who left in 2018 (United Nations Peacekeeping). And finally, it is important to note that the most recent gun statistic (referenced above) was in 2017, meaning with the exit of the United Nations, the gun ownership in Liberia could be significantly higher.

But warlords wielding social power, former leaders still wielding political power and an unstable social balance aren’t the only factors into determining the future of Liberia. The widespread pandemic of both Malaria and COVID-19 are taking a significant toll on the country. Though Malaria is curable, Liberia has found itself struggling to combat the virus with their lackluster medical infrastructure. Malaria is the number one cause of death in Liberia (CDC) and largely impacts women and young children. This was all true even before COVID-19, which is projected to have an even bigger impact in the upcoming year. The CDC is reporting that 526,000 Liberians are at risk of falling into poverty, on top of the struggling economy that Liberia has maintained thus far.

If there are no drastic changes to the politics, economy and the social fabric of Liberia, the country’s future could even be darker then its past. But not all hope is lost for Liberia. The country needs to take the former warlords who wield social influence out of their respective positions- and all ties to former rebel leaders Charles Taylor and Prince Johnson need to be cut. The country needs a targeted, accurate response to COVID-19, by taking advantage of the foreign investment offered to them by the World Bank (Worldbank.org). The leader of the World Bank said “The World Bank welcomes efforts by the Liberia authorities to manage the community spread of COVID-19, building on the lessons from the Ebola experience”. The country also needs to take advantage of United Nations initiatives to aid them in fighting Malaria. The country could also benefit from retracting the ex-wife of Charles Taylor from their social fabric.

The country of Liberia has a dark history of violence- but an uncertain future. A fork in the road leads to two different paths- one of violence, economic ruin and political corruption, and the other leads to potential, prosperity and social balance. If urgent steps are not taken now, the second path will close- and Liberia could find itself in its third civil war in the past 31 years.