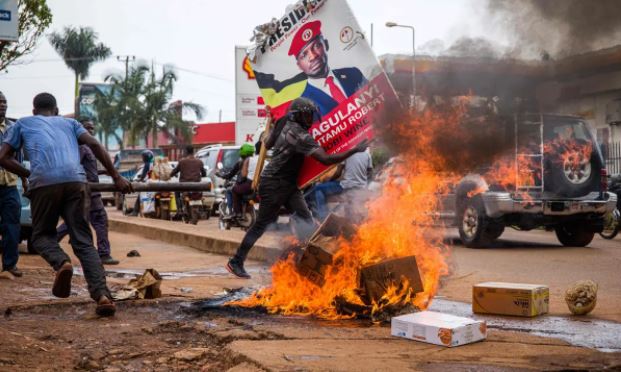 Uganda, the beautiful country blessed with Mother Nature located in the East of Africa, has been silently going through a series of political uprisings with little to no attention from Western media. A recent election won by President Yoweri Museveni, leader of the nation for about 35 years now, saw the noxious violence killing of several citizens in the name of calming opposition rallies during the covid-19 pandemic. Museveni’s main opposition candidate, Bobi Wine, was also arrested for conducting a peaceful protest this March. The tweet announcing his arrest accused the country of having a “cowardly regime”, which, for one of the rare times, doesn’t seem to be another example of political rhetoric - but rather, the blunt truth.

The Ugandan government has been adopting an authoritarian regime in ways that have never been seen before. Firstly, we have the fact that the president has been fraudulently winning elections for about three decades, even going as far as to pass a constitutional amendment removing the presidential age limit just so he can keep running. Then, there’s also the countless journalists and opposition politicians, like Wine, who get routinely harassed by the nation’s Armed Forces — which the president is the commander-in-chief of. To make matters worse, this regime is known for its dishonesty while arresting those who they deem as possible threats, finding whatever reason they can in order to justify its legality.

One example of a regular excuse they give are the implemented covid measures; recently, a group of people were mishandled and arrested at an LGBTQ+ shelter with the claim that they are likely to spread “an infectious disease”. Finally, there is also the civil war in Northern Uganda which has been going on for decades, leaving people sick, traumatised, and homeless.  The government has done nothing, not even providing basic medical care to help them.

With such an oppressive government, the rights one gets as a Ugandan citizen are severely restricted. Media and military are both run by the leading party, limiting possible security or outreach options that can be accessed by the common population. People are, thus, not allowed to live based on the so-called “democratic principles'' proposed by the constitution and these restrictions to everyday livelihood in Uganda have led to severe human rights violations within the country.

Such violations have harmed the lives of children as young as seven years old by forcing them to work in manual jobs such as agriculture and mining. Furthermore, the Trafficking in Persons Report from 2020 has estimated about 7,000 to 12,000 children are victims of sex trafficking in Uganda. In terms of other sorts of sexual harassment, a survey held back in 2016 revealed that up to 22% of women aged 15 to 49 experiences sexual violence, and during the covid-19 lockdown, around five times more women tried to reach out for post-rape care in Uganda. Additionally, the United Nations High Commissioner for Refugees has reported that 81% of Uganda’s 1.4 million refugees are women seeking to escape the high risk of gender-based violence including rape, child marriage, and intimate partner violence. We must also keep in mind that these statistics don’t even represent the countless women who have been stopped from reporting their abuse by people around them and cultural taboos.

Expanding on the previous topic of child marriage, 34% of women in Uganda are forced into marriage before the age of 18. This is usually because of factors such as poverty and biases against the education of girls. At the tender age of being a teenager, these women are forced to reproduce and stay at home to take care of children when they’re merely children themselves. In addition to negatively affecting their future, this trauma can negatively affect their health too. According to UNICEF, around 15 Ugandan women die everyday because of pregnancy and childbirth-related issues as a direct result of the government’s lack of assistance.

The most disheartening of it all is that the government has done little-to-no action for the advancement of healthcare, security, and education for Ugandan women or children despite decades of the President’s extensive campaign promises of making Uganda a ‘dreamland’. The state of Uganda has become so poor that these human trafficking instances have become nothing but the norm for many Ugandans.

Despite all of these occurrences, Ugandans have their spirits up as women’s rights activists demand better treatment each and every day. Organisations like Girl Up Initiative Uganda commit themselves to help young women build their autonomy and escape the chains of conservative patriarchal thought in Ugandan slums. Through joining organisations like the aforementioned, Logoa Women and the Center of Domestic Violence Prevention, people in communities across the country are being educated about the dangers of child marriage and sexual harassment as well as being encouraged to call out for help. Similarly, on the side of political injustice, Ugandans have been protesting against the various maldoings by their president and his government in the light of hopefully making matters better.

While all of what was previously said might just be another flash of statistics to some, we must understand that each of those numbers represent real people in Uganda who suffer from such abuses every single day in their lives. These ‘numbers on the screen’ represent innocent children who have their lives taken away from them due to the lack of security their government has given them as citizens and against atrocities like sexual violence and child labor . It is time for the international community to do more than just record statistics, write reports, and advise their citizens against going to Uganda. We have to do our part as members of the international community claiming to strive for peace and universal brotherhood by getting involved in the Ugandan community through helping local organisations in Uganda, donating to them, and ensuring that citizens in Uganda have better access to the resources around them. Together, let’s speak up for the thousands of children who are silenced when they call for help.