Threat of War Along the Eastern Bloc: Ukraine 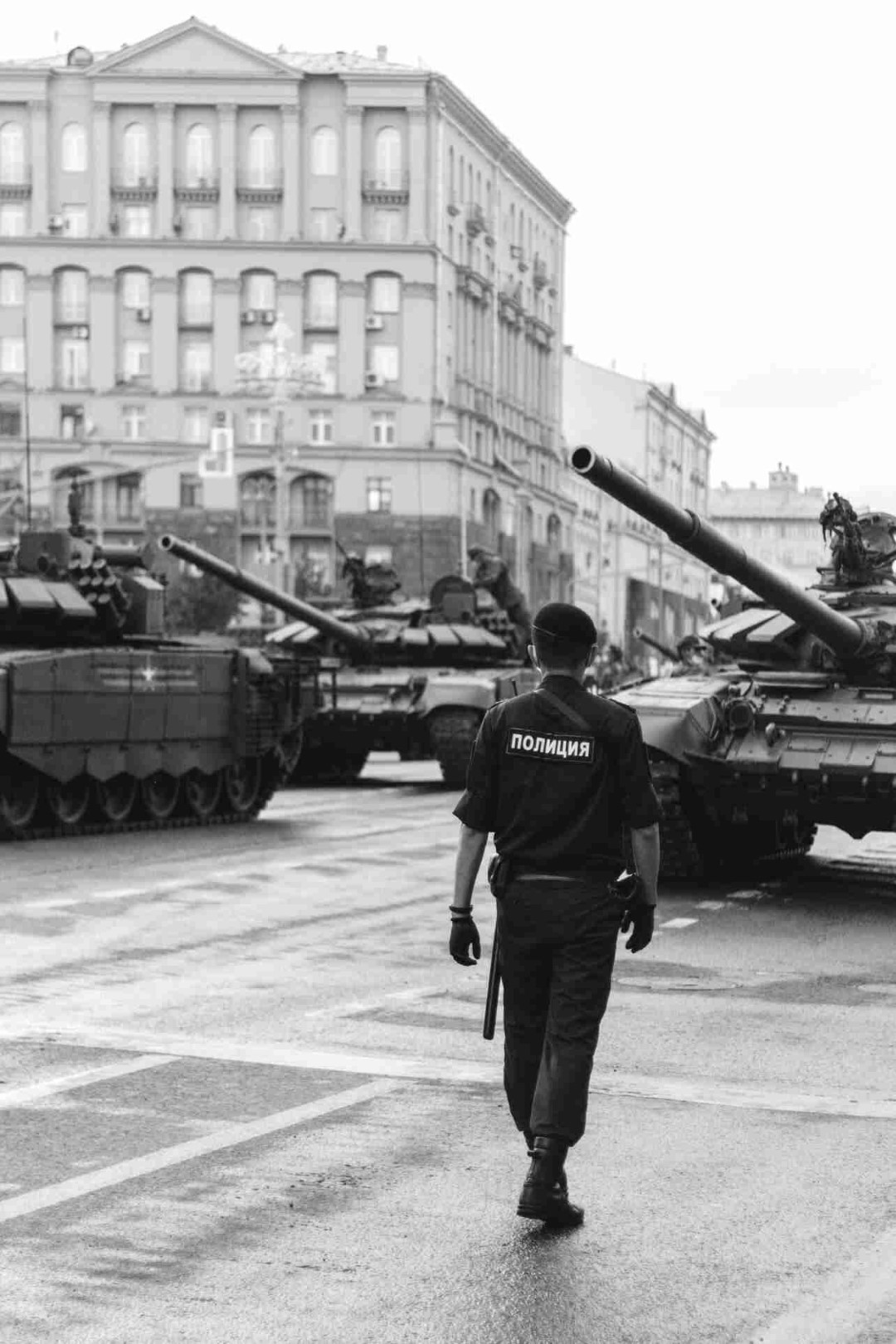 Rising militarization of the Russia-Ukraine border has caused concerns of war along the Eastern Bloc. This brief details the long rooted history between Russia and Ukraine and how it ties into the current conflict. Finally, with consideration to recent developments, the brief analyzes current approaches to the conflict and future actions the U.S. may take in response to continued Russian aggression.

In March of 2021, Ukrainian forces reported  a buildup of Russian military forces along their shared border. By November of 2021, Russian military presence within the region had grown considerably, amassing up to 90,000 Russian troops. As such, in fear of Russian intrusion, Ukraine has stationed its own troops along the border with the intention of protecting its national security and sovereignty as an independent nation.

While estimates placed Russian military forces at 90,000 by the end of November 2021, the U.S. claims that the number of forces has nearly doubled in the span of three months, with estimates at 175,000 Russian troops. Rapid growth of Russian military forces had escalated concerns, both for Ukraine and its allies, namely the U.S and other NATO nations. As troops along the border continue to grow, the threat of military conflict looms over the region.

Russian interference in Ukraine traces back to Ukraine’s prominence as a state in the Soviet Union. While in the Soviet Union, Ukraine acted as a “cornerstone” for the vast Russian mainland, being the country’s economic, industrial, and military powerhouse. Furthermore, Russia and Ukraine maintained a strong familial bond through their shared Orthodox Christian faith. However, their bond came to a halt when the Soviet Union collapsed in 1991 and former states, such as Ukraine, were allowed to declare independence.

Nevertheless, as a result of Russian influence in the country, Ukraine has experienced long periods of democratic revolutions. For instance, in 2004, the Orange Revolution – orange symbolizing the pro-western government supporters – arose in efforts to install Democratic President Viktor Yushchenko over the pro-Moscow Viktor Yanukovych. Although protests were successful, the victory did not last long, and, in 2010 Yanukovych was elected president. Yanukovych’s clear anti-EU stance initiated a new wave of democratic protests known as the ‘Euro Revolution’ (2013-2014) and caused Yanukovych to eventually resign.

Following the removal of Yanukovych, Russia invaded Crimea after an illegitimate referendum vote stating that “more than 80 percent of Crimean residents voted to become part of Russia.” As a result, major world leaders from 40 different countries came together to denounce the invasion and annexation as a violation of international borders and state sovereignty.

However, such efforts have increased tensions from Russia and Russian separatists along the borders. Specifically, the Ukrainian Defense Ministry stated that the increasing amounts of Russian combat readiness in the Donetsk and Luhansk regions have raised Ukrainian concerns. Although major fights in eastern Ukraine ended in 2015, clashes have taken place regularly since then.

As a result of Russian aggression, Ukraine has been motivated to join western alliances such as  NATO and EU. Entering into NATO would give Ukraine a wide-ranging alliance system that would provide aid should Russia invade. However, the West has been reluctant to admit the former Soviet Republic into the alliance, as they would be obligated to enter into conflict if Russia does in fact attack.

The implications of full-blown global conflict in Ukraine are frightening, as both the US and Russia  have extensive nuclear capabilities. Previously, Germany and France have rejected Ukrainian entry, as both countries viewed entry as a needless escalation with regards to Russia. Entrance into NATO requires a full consensus, so it is unlikely that Ukraine will be inducted into the alliance anytime soon.

Russia has strongly reacted to rumors of Ukraine entering NATO. In a joint press conference with Emmanuel Macron, Putin stated, “You will find yourself drawn into this conflict against your will. You will be fulfilling Article 5 in a heartbeat, even before you know it.” Article 5 refers to the collective defense policy that is at the heart of NATO. Putin’s comments all but ensure that Ukrainian admission will not be feasible, as admittance into the alliance will lead to an extreme escalation of the current conflict.

Russian insistence on ensuring that Ukraine does not join NATO acts as one of the main reasons for interference in the region. As stated previously, Russia and Ukraine share connected cultural and historical roots, which Putin cites as the fundamental reason for unification between the two countries. Putin and Russian officials alike aim to return to the former glory of Russia’s Soviet predecessors, instating their own sphere of influence in eastern Europe.

As such, Western desires to include the former Soviet state into NATO, an inherently anti-Soviet military alliance, acted as a “red line” that should not be crossed according to Putin. If crossed, in Russian eyes, it would be an issue of endangering Russian national security, which Russia states it will respond to.

Furthermore, Russia argues that the presence of international forces in the conflict has only escalated the issue, with specific blame placed on the U.S. The U.S. has shown clear support for Ukraine, having provided over $650 million in defense equipment and services to Ukraine in the past year — the most it has ever sent to Ukraine according to the State Department. In doing so, the U.S. has increased tension with Russia, stating that Russia would have to pay a “heavy price” if it chooses to invade Ukraine.

Nevertheless, Ukraine has also expressed desires to de-escalate the conflict, though not at the cost of their sovereignty. Specifically, Ukraine states that Russia has “no say over its ambitions to join NATO.” Many Ukrainans share this sentiment, as thousands of citizens march in Kyiv to show unity against Russian aggression.

Amid rising tensions between Russia and Ukraine, the European Union and NATO have both threatened to place sanctions against Russia.  Denmark's foreign minister said on Monday that the EU is ready to impose "never-seen-before" economic sanctions if Russia attacks Ukraine. European nations can primarily block access to Western technology for new Russian oil and gas projects, as done in 2014 after the annexation of Crimea.

According to the New York Times, The Biden Administration claims that further escalation would kill up to 50,000 civilians and prompt a refugee crisis in Europe. Meanwhile, Russia continues to deny planned aggression towards Ukraine. However, the risks of military escalation between Russian-backed separatists and Ukrainians are high. Top Russian legislator Andrey Turcak proposed to send in even more arms to the separatists, though the suggestion was downplayed by President Putin’s senior aide Dimitry Kozak.

Nevertheless, Ukraine’s Security Service has recently reported finding evidence of “weapons deliveries to the separatists from Russia, including mines, mortars, and explosives.” Kremlin proxies have also found proof of a prepared Ukraine offensive on Donbas, leading people to believe that such provocation will be used to justify a “false-flag” military incursion.

Though they occur simultaneously and consist of overlapping policy goals, there are three distinct methods of persuasion the West may use to prevent an invasion: 1) diplomatic; 2) economic; and 3) military. Escalation through the levels is non-linear, and present conditions demand the use of all three, but drawing the important three-pronged distinction provides a more workable lens with which to analyze the conflict.

The necessary pretext for successful diplomacy is relative military inaction. NATO and the U.S. have been hesitant on this front, only moving troops into Eastern Europe – not Ukraine – as Russia has ramped up its own deployments. It is imperative to diplomatic efforts that, unless forced into a confrontation by the Kremlin, the West remains quiet, especially given that U.S. intelligence has uncovered Russian plans to stage an incident to provide the justification for an invasion.

Even with these precautions, Russia and the West are at a diplomatic standstill. Moscow demands, among other things, the permanent barring of Ukraine from NATO – a non-starter for Washington and its allies. Macron’s meeting with Putin yielded little results, as a Kremlin spokesman reported that “in the current situation, Moscow and Paris can’t be reaching any deals.” As diplomacy stalls, the West must turn to its other policy options in an attempt to restart productive conversation.

The U.S., EU, and aligned countries have already begun to place targeted sanctions on individuals within the Russian power structure. The Treasury Department hopes these efforts will “target, undermine, and expose Russia’s ongoing destabilization effort in Ukraine.” In the case of rising tensions, confrontations, or full-fledged invasion into Ukraine, the West will place additional, more generalized, sanctions on Moscow. The success of this economic tactic is far from guaranteed. Specifically, with the Kremlin, the track record of sanction effectiveness is mediocre; eight years after the U.S./EU bloc levied sanctions to dissuade Russian advances, Moscow still occupies Crimea.

Attempts to cut Russia off from Western-controlled financial institutions may make war-fighting a more difficult effort, but it would be far from “killing the regime.” Russia is increasing its own dollar and gold reserves, and Chinese-Russian economic cooperation has, particularly recently, filled the gap left by exiting European financial systems. Leveraging the economic might of the West will remain an important component of conflict management, but alone, it won’t suffice.

The responsible handling of the Ukrainian conflict will come down to effective and non-escalatory force-posturing. In order to minimize escalatory risks, NATO and the U.S. should continue their efforts to prevent a Russian invasion through more indirect tactics – chiefly, financially supporting Ukrainian efforts and engaging in numerous arms deals. The list of Western-backed military aid headed to Kyiv is extensive:

If these efforts fail, meaning Putin orders Russian troops to push on towards Kyiv, the West must understand that, at least temporarily, the fight for Ukraine is lost. There are negligible circumstances wherein it would be in the geopolitical interest of NATO and the U.S. to militarily confront Russian forces in order to prevent a quasi-occupation of Ukraine. The U.S. understands this: President Biden recently made clear that the U.S. would not be entering a post-invasion Ukraine to evacuate U.S. nationals. Ukraine understands this: President Zelenskyy warned that a confrontation will lead to a “full-scale war” in Europe. NATO is interested in deterring Russian expansion, but NATO is also interested in not repeating the mistakes of the Cold War era.