Stuck Like Glue: Eating Meat in the Modern Era 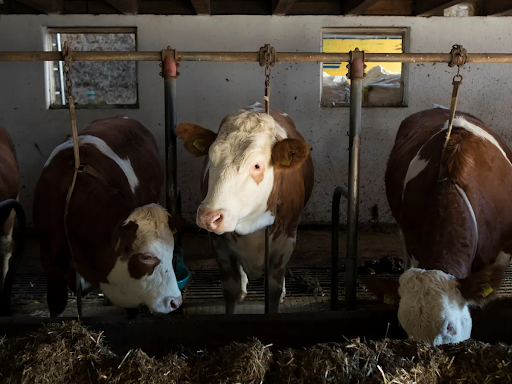 Between 1961 and 2020, Bahrain increased its production of meat by 8,014%, a staggering change in only 60 years. Surely, this 8,000% increase must be an isolated experience, right? After all, you and I both know more vegetarians and vegans today than our parents or grandparents did decades ago. We live in a different world than that of past generations.

“We are responsible moral agents that would never unnecessarily harm animals.” This is the thought of many people today, conditioned to believe that our meat-eating habits don't have long-term consequences for the global community.

Let me ask you a simple question: how often do you consider the journey that the food periled to make it onto your artfully crafted dish at Olive Garden takes? Do you stop to consider who farmed the wheat that went into your unlimited breadsticks, the tomatoes farmed to make your pasta sauce, or the livestock raised for slaughter that, through extensive processing, becomes the meatball you swirl together with angel hair? If you're like me and many others, you have not considered these questions as anything more than a passing thought, let alone have come to terms with the morality of your actions.

But today, I want to harvest the facts and lay them all out on the table for you to see. The average American in 2021, according to the OECD, ate about 51 kg of poultry, 26 kg of beef and veal, and about 24 kg of pork annually. Although the US is an example of a country with higher-than-average meat consumption, places like Argentina, Israel, and Malaysia consume even greater amounts of meat than the US. When you zoom out globally, the idea that the United States is the sole perpetrator of a meat-centric diet is hardly realistic. The obsession with meat is a global phenomenon.

The answer? Commodify animal slaughter as if it were just another manufactured item in a factory assembly line. Today, 99% of animals raised for slaughter in the US originate from sources that follow factory farm practices. Factory farming prioritizes the need for profit – the need to keep pace with global meat demand – over the longevity of the lives and natural wellbeing of animals. Time and time again, factory farming operations are exposed for their cruel conditions, violent treatment of animals, and lack of consideration for the emotional and physical wellbeing of animals.

But, there is a disconnect here. You and I (considering you eat meat) might believe the propaganda we see in the grocery store on a daily basis. Images of rolling meadows of luscious grass, farm animals roaming in an open landscape with no hindrance to mobility, and cartoon-like cows that distract consumers are all tactics used to deflect the attention of the average person away from realizing just how vicious the factory farming industry really is.

When you consider the impact on animal lives alone, the moral weight of eating meat becomes incredibly heavy. It's hard to reckon given the enjoyment many of us receive by eating that Thanksgiving turkey with the pure fact that almost all of us would refuse to kill the animal ourselves.

This only covers the purely moral aspect of farming; I haven't even touched the vast environmental impacts: spraying of poisonous fecal-tainted water, extreme greenhouse gas pollution, and habitat destruction. Add everything together and you start to have a compelling argument for the elimination of meat from the human diet, especially when we consider the rising accessibility and cost-effectiveness of alternatives.

I say all of this knowing well that I ate steak a day ago, put chicken on my salad today for lunch, and will likely eat meat many more times this year. But, over the past few years, I’ve become much more conscious about my actions and food choices. I urge whoever may find themselves at the end of this article to reconsider what meat really means to them. What can a turkey provide for you that an alternative cannot? Can we justify the killing of animals simply over our preference of taste? The next time you bite into that chicken burrito, cut into that NY strip steak, or marinate those pork chops, consider what that animal once was and where it came from.

I'm not advocating for vegetarianism or veganism, I'm simply stating that the reality of the meat industry is not as bright as you may think. Simply consider what meat means to you. Consider the emotional toll that killing animals for your consumption might have on you. For once, consider the animal for more than what it appears as on your plate.